World library history knows of no such disaster on such a large scale as that which the Library of the Russian Academy of Sciences faced after the fire of 1988[*]. The large volume of collections that suffered and the intense aggravation resulting from the influence of water, steam and high temperatures on thousands of other books, required unusual decisions in the organization of the restoration process.

[*] The losses came to 298961 items. One of the greatest losses was the ruin of 152245 imprints of foreign publications before 1930 which were arranged in stacks according to Academician K.M. Baer’s classification system. Moreover, more than 100 thousand items of this collection had suffered from fire, water, steam and high temperature.

It should be noted that, initially, in the general plan of measures for the elimination of the fire’s consequences, the long-term program of restoration of damaged inventory had a major role. In the past the restorers, as a rule, had to deal with natural aging of the material base of the book, but now they met with damage of artificial character — thermal destruction.

In the BAN there were quite sufficient means for ensuring the safety of certain books, but the expediency of using some or other methods had to be defined according to the recovery work (the arrangement of materials after drying, corrections to the catalogs showing the existence of books and the like). Besides it was also necessary to consider general library funding problems and the need for a rational means of expenditure.

Now it is absolutely evident that the consequences of such disastrous calamities can be eliminated by professional and economic efforts not only within the country, but also with international help. Foreign colleagues perceived the Library fire as their own disaster and expressed their readiness to help in carrying out the recovery program for collections.

In June 1988, after the visit of BAN by Peter Waters the Library of Congress took on the role of coordinating international help for BAN’s recovery of its damaged foreign collections.

We should note that after thorough examination of the state of the collections and the technical and economical potential of BAN, Peter Waters proposed several ways of preserving damaged collections: 113
114¦ microfilming, encapsulation, and reformatting in a program of phased conservation.

The selection of optimal methods for saving and further recovery of books depended, in the first place, on the uniqueness of the Library of the Academy of Sciences’ damaged foreign collection — the “Baer Collection”.

The first practical experience of restoration of major artifacts, damaged by the fire, showed that because of complexity and labor intensity of restoration processes and also their cost, the period of recovery process only in such a would be inappropriate. Microfilming of the same large number of volumes also require large financial support.

Thus, the objective difficulties in organizing the restoration program, microfilming and encapsulation, as well as Peter Waters’ concrete recommendations caused the Library to conclude that it needed to adopt the method of phase conservation for the Baer collection. It is difficult to overestimate the role and importance of boxes in solving the problem of saving documents damaged by the fire. However, there was no experience iusing the phase conservation method in our country and abroad on such a large scale.

During the first stage of the work, LC undertook provision of necessary equipment and microclimatic storage boxes. Until 1994 these boxes were produced made in USA by means of the Custom Manufacturing Inc. (CMI) company’s sponsorship with the help of special computer control equipment.

In September, 1994 on the means received under the grant of the Getty Conservation Institute (USA), their program-controlled equipment was installed in BAN, permitting production line manufacture of individual storage boxes for every document using maximum automation. A donation of special archival acid-free cardboard was received also.

For successful solution of the problems that curators and conservators had, it was very important to provide them with quick accurate information on current scientific research in this area, so they could implement these programs. A special database (DB) was developed, and also the structure of a record reflecting all the characteristic features of the Baer collection 114
115¦ according to its composition and physical condition of editions, with indexing of necessary measures about their conservartion.

The main goal of this database was to make easier not only process of conservation, but also to promote recovery of the damaged collections. Existence of most complete data about books decreases the necessity of frequent book use, increases the level of their safe keeping and makes it possible to substantiate scientific planning for recovery.

One of the most important problems that BAN employees faced was a decision on some questions concerning the choice of box materials. In Russia up to now for these purposes was used technical or common cardboard.

Credit for initiatives to organize research work concerning the creation of domestic archival cardboard in Russia belongs to the Library of the Russian Academy of Science. By 2000, BAN, together with the All-Russia Scientific Research Institute for Paper (VNIIB, SPb) with financial support of the «Open Society» Institute took out a patent for development of the technology for industry production of acid-free cardboard.

Practical adoption of phase conservation is carried out on the basis of a precisely worked out by BAN experts technological scheme (Pic.) that reveals all principal processes of production, their sequence and interconnection; it contains the full mechanism of realization of all complex measures of preventive conservation for each separate collection. It also seems very important that in this program we succeeded in keeping the principle of least intervention into the material base of documents and used methods of exceptional care in applying modem conservation processing.

The fulfillment the research program and achievement of concrete technological conservation methods became a qualitatively new stage in the determination of the principle ways of ensuring the security of rare and valuable BAN collections.

Another positive aspect, in our opinion, of this program is that during its development and adoption, one language developed between the librarian and the conservator. The library worker should not only be able to diagnose the situation in a book-depository but also deal with conservators and his own colleagues in one professional language.

Under this program there is monitoring of editions placed in microclimatic boxes, it allows to obtain data for analysis and conclusions on the degree of their protection, and the information itself is entered into the database. Further, according to a set order of priority, constant selection of editions for planned restoration is carried out and this data is also put into an information map. 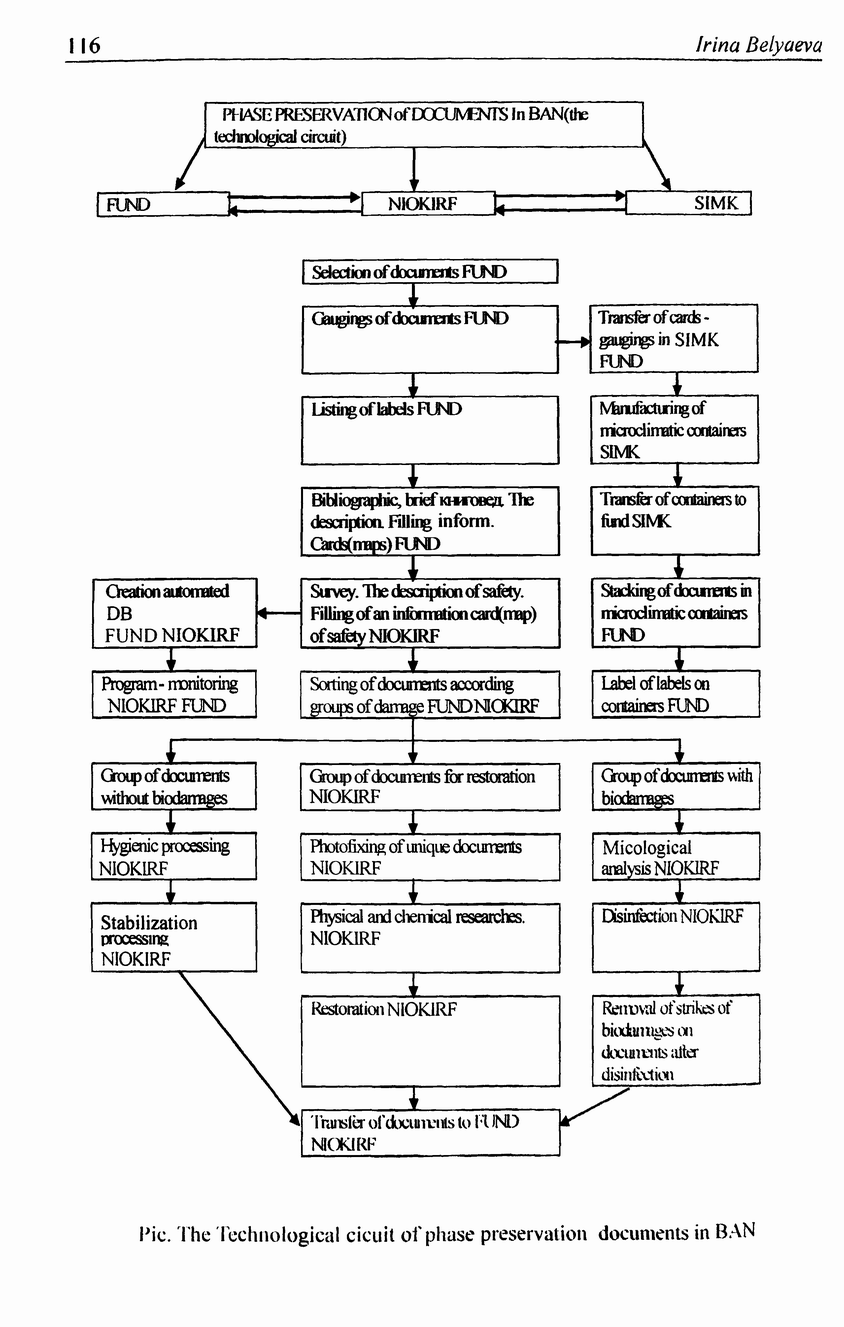 In a general plan of actions for ensuring the safety of BAN collections phase conservation is at the front. The existence of materials, technical plans and trained personnel has allowed the Library to formulate a program 115
116
117¦ of phase conservation and ensure its implementation on a level appropriate to modern requirements. It is extremely important, in our opinion, that according to tan elaborated technological scheme, the program can be implemented with reference to any one of the library collections demanding urgent measures for their conservation.

It should be noted that the character of initial rescue work was changed and expanded by BAN specialists. It became a special form of activity to increase the collections’ safety and improve their accessibility. In the Library all this has turned to the complex system of measures operating on a constant basis. Up to now more than 55 thousand editions are transferred to phase conservation. Experience of its adoption is used also in other libraries and archives of Russia and the countries of the CIS.